Agency/Recruitment Agency: the organisation through which the contract is obtained and administered

Case Law: refers to law and legislation based and developed using real life cases, as with IR35.

Chargeable expenses: expenses that can be charged directly to the client

Confirmation of arrangements letter: a written document which confirms the way in which a contractor operates on a day-today basis (working practices) from the end client

Control, Substitution and Mutuality of obligation: a set of principles used in the determining of IR35.

Compliant Umbrella Company: an umbrella company that claims to conform to HMRC tax regulations by deducting NI and income tax via PAYE.

Deemed salary: the payment made by the director of an intermediary company to his/herself that is relative to the payment received by a permanent employee of the same description

Disguised employee: a limited company contractor whereby IR35 applies A.K.A being inside IR35

Dividends: the payment received by the director(s) and/or shareholder(s) from the company’s profits

End user: the hiring company/organisation/client for which the contract is undertaken

Genuine contractor: a limited company contractor whereby IR35 does not apply A.K.A being outside IR35.

Inside IR35: term coined to describe a limited company contractor where IR35 applies A.K.A a disguised employee.

Intermediary: an entity that exists as a means of operation between the worker and engager.

Intermediaries legislation: a piece of tax legislation implemented to tackle the tax avoidance of limited company contractors who should be classed as, and taxed like, a permanent employee of their end client

Liabilities: the amounts of backdated taxes due if caught by the legislation

Limited company: a private business where the owners’ debt responsibility is restricted to the amount invested.

Limited company contractor: a worker, who is usually one and the same with the Director, who operates on a contract basis through a private business where the owners’ debt responsibility is restricted to the amount invested.

Notional contract: or ‘hypothetical contract’ refers to the idea the taxman or investigating person forms in determining a contractor’s relationship with the client.

Off payroll workers: those workers at a company that are not on the PAYE payroll. This usually refers to contractors, freelancers and consultants.

Outside IR35: term coined to describe a limited company contractor whereby IR35 does not apply A.K.A a genuine contractor.

PAYE – Pay as you earn: a method of paying income tax and national insurance contributions via a company payroll.

Personal Service Company (PSC): interchangeable with limited company where the contractor pays themselves tax efficiently, through a combination of low salary and high dividends.

Public Sector: the part of an economy that is controlled by the government.

RTI: Real Time Information – information about tax and other deductions under the PAYE system transmitted to HMRC by the employer every time an employee is paid.

Sole trader: a worker who operates a business as an individual and is personally liable for all debts.

Status tests: the generally accepted methods of deciding on whether a limited company should be considered a disguised employee or a genuine contractor.

Substitute: an alternative worker who undertakes the operation of a contract if required.

Supervision, Direction & Control (SDC): One of the Key Status Tests. SDC is looked at to decide what degree of control the client has over what, how, when and where the worker completes the work. Genuine contractors will exercise a high level of control over their working practice. Typically, they need minimal supervision and won’t be expected to conform to standard working hours at a designated place of work.

Working practices: the day-to-day working relationship between the contractor and end client. 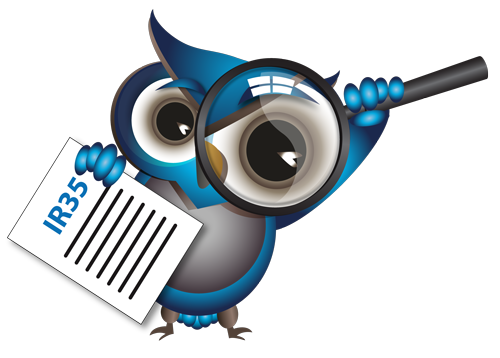 Looking for a deeper understanding of IR35?

Read our Wise up on IR35 guide here, or view the latest news here.