Smash your assignment with these hot Wimbledon tips

As the players took their place at the net, Wimbledon 2019 saw some great highlights as rising stars went head to head with seasoned pros. It’s often said that tennis is a game of errors as much as a game of strategy and stamina. What’s certain is that when the last match is over, we’ll remember the shots that made the day. For contractors, completing a successful assignment can mean knowing which shots to play under pressure, here’s what you can learn from the Game of Kings.

The serve is the ultimate tennis weapon. It can usually dictate the leverage or even the outcome of your tennis match. A strong start has both psychological and practical advantages that can give you breathing space later on. For contractors, it’s important to have everything in place at the start of your contract. Making sure you take the time to review your contract and address any issues with your client, or agency, should ensure you’re compliant with current legislation and meeting your client’s expectations.

There are some who consider Del Potro’s forehand the deadliest in tennis, while others think that when Verdasco is timing the ball well, his forehand has even more rip. What’s certain is that today’s players must react and recover more quickly because of the power involved in the game. The forehand, often played with an open stance, allows the player to react with agility while remaining stable. No project will ever go 100% according to plan, but skilled contractors will react confidently to changes, meeting them head-on without being thrown off course.

Roger Federer is taking a swing at tennis history this summer with his dashing single-handed backhand. Generally regarded as one of the harder shots to execute, a backhand uses the right arm on the left-hand side, which can throw off coordination. Although it’s not advisable to be reckless when it comes to contracting, contractors who regularly push themselves out of their comfort zone stand to accumulate a more diverse set of skills that will give them a competitive edge.

Some people think that the serve and volley is dead, the facts, however, prove otherwise. While volleys might not get the attention on the court, their consistent win percentages prove their effectiveness. Contractors are valued primarily for their specialised industry skills, so playing to your strengths should form the backbone of any contractor’s strategy.

Who could forget Rafael Nadal’s overhead winner against Dudi Sela last year? Not least because of the confusion over how to classify the shot: “A reverse no-look smash? An improvised overhead volley?” wrote Wimbledon on their Facebook page. For the overhead shot, the player’s eyes need to remain firmly on the ball so that they can move with it. Contractors too must watch out for any issue with schedule or budget while keeping their eyes firmly on the target. What looks like the most audacious and daring moves are often made possible through fast and effective judgement.

A good drop shot requires great touch. The ball should bounce low and near the net, sometimes using underspin (or backspin). Making one’s grip slack at the moment of impact will allow the racquet to absorb more force and make the ball less likely to bounce high. Make no mistake, the drop shot is tactical. Sometimes contracting involves playing the long game to get the most out of your career. Investing in skill development and professional qualifications will ensure that your skills remain in demand in the contracting sector. 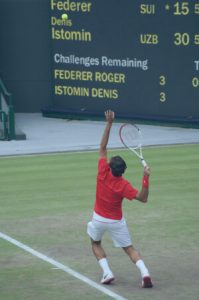 One of the game’s hottest new stars Cori ‘Coco’ Gauff made her Wimbledon debut this year with an early victory against Venus Williams. Trading brutal groundstrokes from the back of the court against one of the game’s most powerful hitters, she also showed subtle touches, including a lob over Williams in the fifth game of the first set. The lob technique has the ability to change the course of a point by deploying an element of surprise. In contracting, it’s a good idea to have a few tricks up your sleeve to outfox the competition. For example, developing your professional network through sites like LinkedIn can add an extra dimension when it comes to getting talent-spotted by agencies.

One of the biggest challenges facing the contracting sector involves changes to the off-payroll rules introduced into the public sector in 2017. From April 2020, these changes will also apply to the private sector. To find out more, read our article here.

ContractingWise offer impartial information on a wide range of contracting services. To speak to a member of our team call: 0203 642 8679

Talk to a member of our team about your contracting options